Costa Rica is considered a truly Coffee Paradise. With a land area of only 51.100 km2 (0.03% of the planet’s surface) and 589.000 km2 of territorial waters, Costa Rica is one of the 20 countries with greatest biodiversity in the world. Its geographic position, two coasts and a volcanic system provide numerous and varied microclimates which explain this natural wealth, both in terms of species and ecosystems. The more than 500,000 species that are found in this small country represent nearly 5% of the total species estimated worldwide.

The Government of Costa Rica is one of the oldest democracies within all Latin American countries. It enjoys one of the most stable and progressive economies in the area, with no army or military force by law since 1948.

Coffee production in Costa Rica began in the late 1700’s in the Central Valley, which had ideal soil and climate conditions for coffee plantations. Coffee Arabica was introduced to the country directly from Ethiopia.

In the nineteenth century, the Costa Rican government strongly encouraged coffee production, and by 1821, at the time of independence, Costa Ricans had already realized the value of coffee as an export product and as an opportunity that permitted farmers to release themselves from the poverty conditions in which they had previously subsisted. 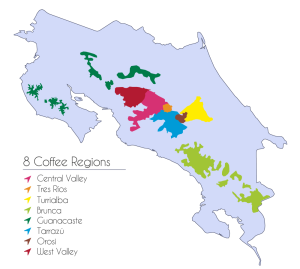